Anti-ageing is a branch of medicine focused on how to prevent, slow or reverse the effects of ageing, thus helping people to live longer and healthier lives. Recently, however, more evidence-based medicine has led to antiageing becoming a multi-billion-dollar industry. In the past few decades, the market for anti-ageing products and services has grown into a global industry valued at an estimated US$261.9 billion in 2013, up from US$162 billion just five years before, according to BCC Research, a publisher of technology market research reports based in Wellesley in the US. [1]

The recent medical literature and evidence-based medicine show that, as we age, there seems to be a loss of fat volume in some areas of the face, as well as a change in the morphology of the facial skeleton. Facial soft-tissue augmentation by injection has become increasingly popular as a minimally invasive option for patients seeking cosmetic facial enhancement. Replacing lost soft-tissue volume allowed for a more comprehensive approach to total facial rejuvenation. It has been demonstrated that orthodontic treatment with an intraoral orthopaedic dental appliance (Homeoblock, Ortho-Smile) increases soft-tissue volume and enhances facial symmetry, producing soft-tissue changes consistent with improved facial esthetics.[2] This appliance can be added to the treatment protocol of facial injection to create a relatively non-invasive interdisciplinary approach to midface enhancement.

With this article, we show how orthopaedic/orthodontic appliance therapy, in conjunction with the placement of dermal fillers for the reduction of lines/wrinkles and depressions in the face, can produce desirable facial soft-tissue enhancement. Furthermore, we show that the volumetric changes achieved by this combined treatment approach can produce a desirable result, namely a more youthful appearance.

A healthy woman in her mid-sixties presented for treatment with a strong desire to improve her facial appearance (Fig. 1). Her oral hygiene was good and there was no active periodontal disease. She had headache symptoms and clinical examination showed a disc displacement with reduction on her right side, with a maximum jaw opening of 38 mm. Her centre line was displaced 2 mm to the right and lined up when she opened < 10 mm, indicating that she had a mandibular displacement to the same side. A Homeoblock appliance, with a 5 mm bite block on the right side (to decompress her temporomandi bular joint), was fabricated and delivered (Fig. 2). When she closed on the bite block, her occlusion freed up and the muscles realigned the mandible so that her centre line lined up correctly. Her headache symptoms were relieved in three weeks and her maximum opening was improved to 42 mm. The patient continued Homeoblock treatment for nine months.

Fig. 1 Pretreatment facial and anterior intra-oral photographs (note deep dental overbite).
Fig. 2 The Homeoblock appliance.
Fig. 3: The pretreatment face, the post-treatment face at six months and nine months, and finally, a morphometric evaluation of the change.
Fig. 4: Morphometric evaluation of the final results: finite element analysis showed increased facial volume with a directional change of almost 4 mm, indicated by the red to orange colour.
Fig. 5: Superimposing the red post-treatment face over the blue pretreatment face, we can graphically illustrate the volumetric
changes that occurred during our treatment. There was an increase in volume in the frontal, supra orbital, inferior orbital, zygomatic, nasal base, upper lip, nasolabial depression, and marionette and pre-jowl areas.
Fig. 6: Morphological facial changes in the lips, zygoma and jowl area after the placement of 1 ml Restylane and 1.3 cc Radiesse. Note the deeper red to orange colour in the areas where the injections were placed.
Figs. 7a & b: Before and after facial photographs. 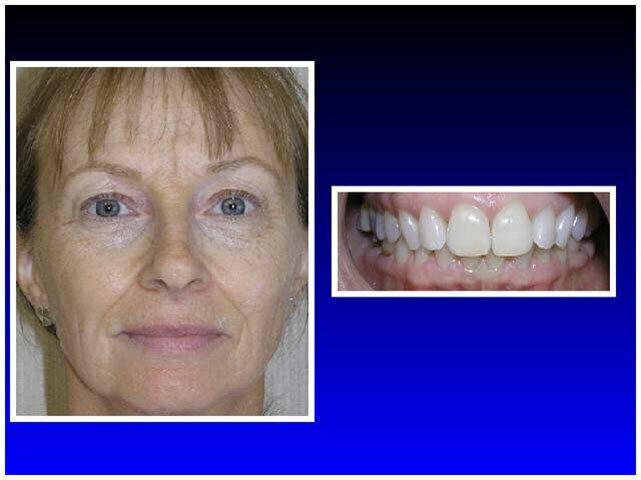 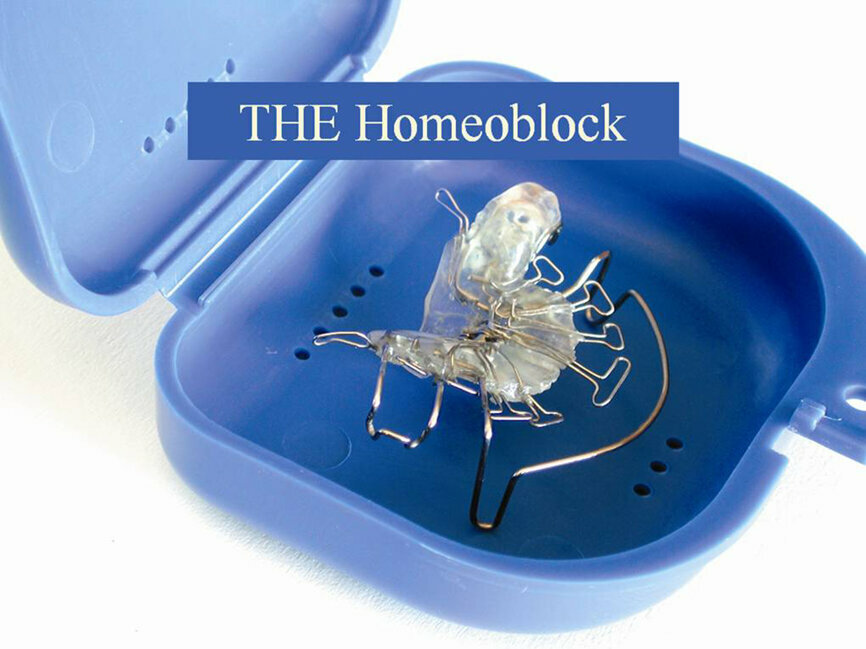 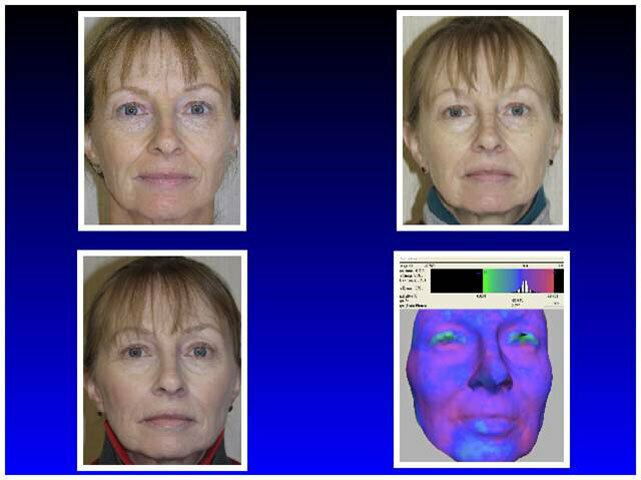 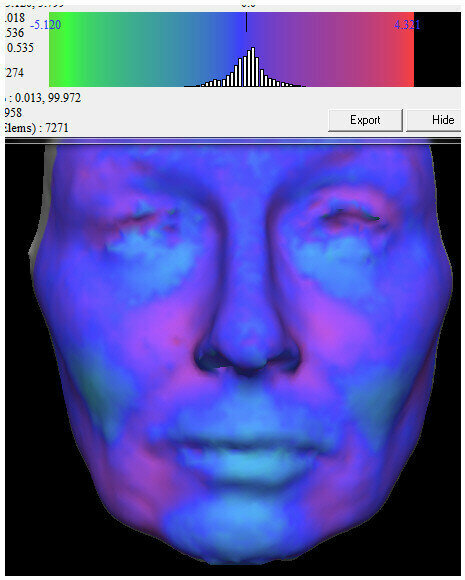 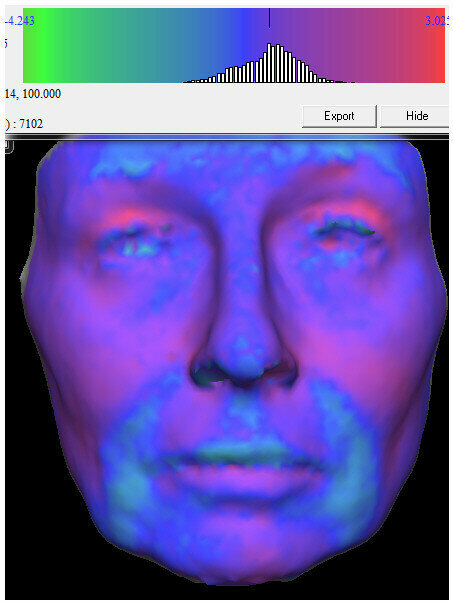 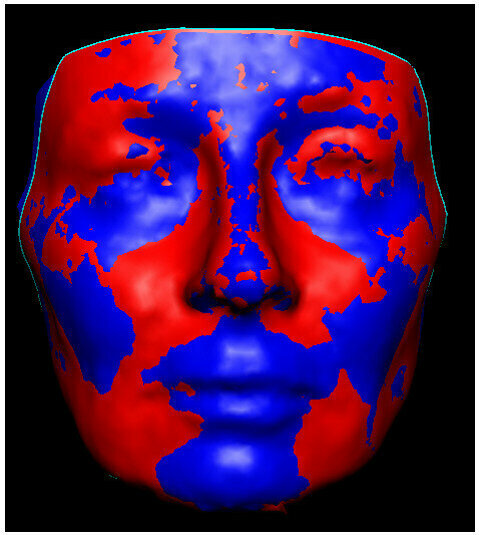 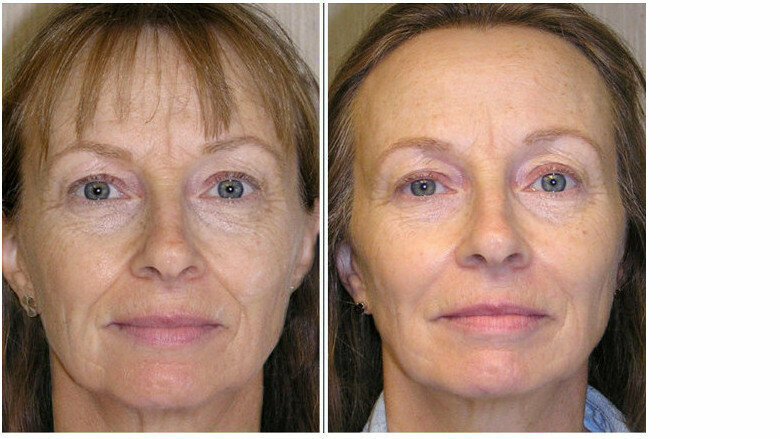 Intra-oral and extra-oral photographs were taken to monitor treatment, and 3-D stereo photo grammetry was performed. Extra-oral 3-D digital photographs were taken with a facial capture system (3dMD). A facial capture system (3dMD/Kodak) and stereophotogrammetry were used to generate a clinically accurate digital model of the patient’s facial surface. It uses a technique of stereotriangulation to identify external surface features viewed from at least two cameras. This approach incorporates the projection of a unique, random light pattern that is used as the foundation for triangulating the geometry in 3-D. The capture takes < 2 ms per frame. The data is processed and a highly precise < 0.5 mm root mean square of the distance measured is calculated, creating a digital model of the patient that is ready for immediate clinical use. Stereophotogram metry for quantifying facial morphology was introduced in a study published in the Journal of Dentistry in 1996.[3] It was concluded that “stereo photogrammetry is a suitable 3-D registration method for quantifying and detecting development changes in facial morphology”.[3]

Evaluating the patient’s face over the nine months of Homeoblock treatment for her temporomandibular dysfunction showed a change in the morphology of the face (Fig. 3). Morphometric analysis was performed by superimposing before and after 3-D images and using finite element modelling. Thousands of triangular reference points were used to establish the change. The blue area indicated no change and the red to orange areas showed an increased dimension of up to 2.9 mm. We saw an increased volume above and under the eyes, the zygomatic region, the upper lip, and the marionette and pre-jowl areas. From the facial photographs, we could see a reduction in the lines, wrinkles and depressions (Figs. 4 & 5).

After nine months, the patient’s facial changes prompted her to go forward with injections of dermal fillers. She was given 1 ml of Restylane (Galderma) for lip enhancement and two 1.3 cc corrections with Radiesse (Merz Aesthetics) in the pre-jowl and marionette areas and along the inferior border of the mandible, and the inferior and lateral borders of the zygoma (Fig. 6).

Post-treatment, the patient’s face appeared more youthful with better defined cheekbones and a firmer jaw line. The skin appeared smoother with fewer lines, wrinkles and depressions (Figs. 7a & b).

Facial changes related to palatal expansion are clearly outlined in Singh: “The maxillary complex shows a change in size (and/or mass) allied with an increase in structural complexity, in association with biological processes.”[4] Palatal expansion presumably, switches on osteoblastic genes associated with active boney deposition and concomitant remodeling of the spatial matrix ensues.”[4] In relation to the changes around the eyes, we must recall that the maxilla forms the floor of the orbit and skeletal changes may become apparent after expansion;[4] specifically, changes in orbital morphology may be reflected on the skin of the face: as the lower eyelids become tighter, the lateral canthus becomes more horizontal; facial width increases, particularly at the zygomatico-maxillary sutures; and the craniofacial  form, putatively, not only functions better, but looks more attractive.[4] These changes have been documented in children, where palatal expansion is an everyday occurrence. The current article documents similar changes in a non- growing adult. Combining the results of palatal expansion and the placement of dermal fillers, we obtained a very satisfactory improvement in facial aesthetics.

Editorial note: A list of references is available from the publisher. This article was first published under the title “Anti-ageing medicine and orthodontic appliance therapy treatment: An interdisciplinary approach” in ortho--international magazine of orthodontics No. 02/2018. The title of this article was changed here after the publication was printed as per the authors' request.

Historically, when a patient’s dental condition reached a state of total tooth loss, treatment was limited to a complete denture with no hope of ...

SALLANCHES, France: French implantology specialist Anthogyr—part of the Straumann Group—is known for its strength in innovation and high-performance ...

STOCKHOLM, Sweden: An explosive new report by the Swedish newspaper Dagens Nyheter has revealed the widespread existence of ethnic discrimination ...

News Mon. 23 August 2021
Designing for the environment—sustainability in plastic products

There are many different aspects to consider in guiding the individual to suitable oral hygiene products: the patient’s oral status, abilities, ...

News Tue. 7 June 2022
Digital dentistry is not the future; it is the present

BASEL, Switzerland: It is clear from the growing number of clinicians already using digital technologies that offering simple, safe and more pleasant ...

News Tue. 21 December 2021
Interview: How to improve your prophylactic technique

HELSINKI, Finland: The importance of good oral health from a young age is a message that still needs to reach many people. Recently, a Finnish 27-year ...

KUOPIO, Finland: A study by researchers in Finland and the UK has found that self-reported daily smokers had a higher incidence of deepened periodontal ...

News Sun. 26 December 2021
Slow down everyone—dentistry does not need to be done at speed—Part 2

These days, there is a growing emphasis on quality over quantity, that is, preferring an object or service that is worthwhile rather than a quick and ...