“Periodontics is now the most active specialty”

“Periodontics is now the most active specialty”

At EuroPerio10, Dental Tribune International had the opportunity to speak with Prof. David Herrera, who is the scientific chair of this year’s congress. He is a professor of periodontics and the associate dean of dental clinics at the Complutense University in Madrid in Spain. He is also the director of the university’s postgraduate programme in periodontics, which is accredited by the European Federation of Periodontology (EFP).

Prof. Herrera, being scientific chair of EuroPerio10 sounds like quite a challenge. How has the experience been so far?
I have been involved with the EFP for many years. Being the EuroPerio10 scientific chair has been my most important commitment to date. I have been responsible for designing and organising the scientific programme. This is a duty that usually lasts for the three years in between the EuroPerio congresses, but of course, owing to the pandemic and postponing of the congress, I have been active with it for the last four years.

As the scientific chair, I have had the best time. It is a reward to work with the best practitioners in the world. It has been a lot of very challenging work, not an easy job. You must always perform at your best, but at the same time, it is a privilege to get to work with the top experts in the field. When I contacted some of them, I expected that they would not have the time, that they would not be interested in presenting a 20-minute lecture. However, this was not the case. They reserve the EuroPerio dates years in advance and wait for the invitation. Even the biggest names do that. We usually do not get negative answers. This year, we have over 130 top-level experts participating.

On 16 June, Hall D was packed with attendees eagerly awaiting the livestreaming of two mucogingival surgeries that were to be performed to cover multiple gingival recessions. (Image: Dental Tribune International)

Do you think you are going to miss it?
After EuroPerio10, I will wear another hat again as the chair of the EFP Workshop Committee. It is the committee that has been involved in the preparation of the EFP guideline on Stage IV periodontitis.

EFP has compiled a comprehensive scientific programme with more than 130 speakers for EuroPerio10. Could you please outline the highlights of this year’s congress?
The live surgeries are definitely a highlight. Prof. Giovanni Zucchelli performed the first live surgery at the University of Copenhagen during the last EuroPerio congress in Amsterdam in the Netherlands. First, attendees will be able to see and compare two different approaches to treating multiple areas of gingival recession. Dr Ion Zabalegui from Bilbao in Spain and Dr Massimo de Sanctis from Milan in Italy will perform the same surgery live, and attendees will be guided through each step. The other live surgery will be performed by Dr Istvan Urban from Budapest in Hungary.

At EuroPerio10, the EFP guideline on Stage IV periodontitis therapy will be discussed. What are the most significant challenges in this respect?
Periodontitis in Stage IV is the most severe, most advanced periodontitis. There is bone destruction of 50% or more, and the difference between Stage IV and Stage III is that sequelae arise from this. The teeth are moving, or they have moved into a different position. The masticatory function is not good, and there may be more than five teeth missing, so there are a lot of problems facing a patient in Stage IV periodontitis. Even if we can treat the infection and the periodontal tissue is healthy again, the mouth is not functioning properly. Therefore, you need something else. You need periodontal therapy.

In this current guideline, we are describing what else you need to do for the patient with Stage IV periodontitis. What do you need to do to restore the masticatory function? You might need orthodontic therapy, prosthodontics or dental implants, whatever you need to do when the periodontal tissue is healthy again to get a stable environment and restore a healthy mouth. 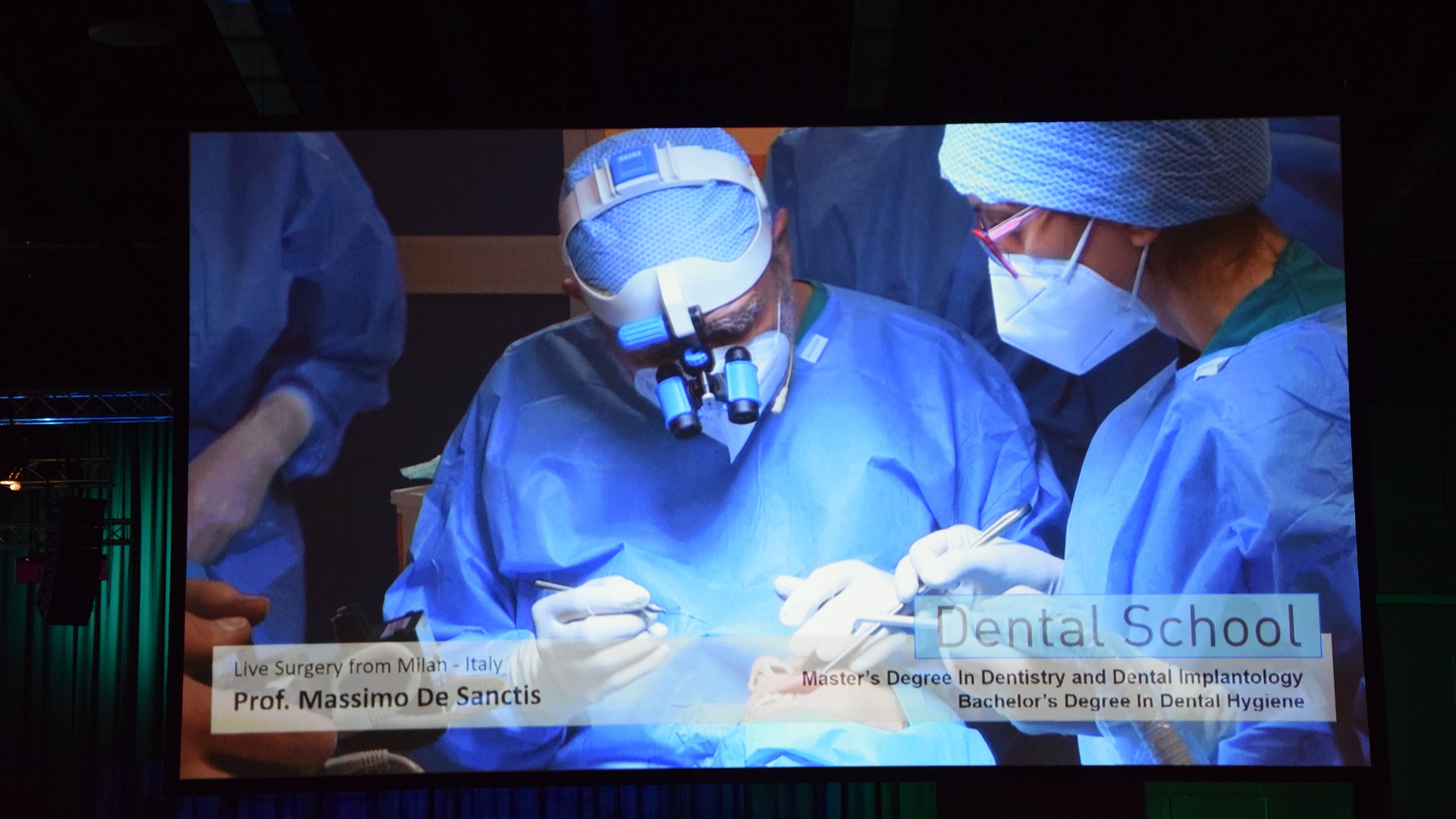 Two of the most widely used approaches were presented: the tunnel technique, which was performed by Dr Ion Zabalegui from Bilbao in Spain, and the coronally advanced flap, performed by Dr Massimo de Sanctis from Vita-Salute San Raffaele University in Milan in Italy. The surgeries ran in parallel and were shown alternately, allowing attendees to follow the critical steps of each method. (Image: Dental Tribune International)

Therefore, it seems essential to have an interdisciplinary approach with regard to treatment of Stage IV periodontitis.
Exactly. It is very important. Orthodontists, prosthodontists and other specialists seem to be very afraid of these cases because they believe the prognosis is going to be poor and that it is not worth investing time and money in those patients. However, based on evidence and what the guideline demonstrates, it is in most cases treatable. You can do something and something much better than removing the teeth and placing implants, because tooth retention has a better prognosis than the prognosis of an implant.

The guideline gives recommendations to periodontists, orthodontists and prosthodontists so that they may work successfully together for better treatment results.

These most severe cases are usually treated with full extraction, full-mouth dentures and implants. We have shown that this can be avoided. Of course, more advanced analysis and diagnosis are needed in order to be successful, but it is feasible and worth exploring.

At the end, a full-mouth extraction might be needed, but this guideline provides another way to look at a case.

In the end, periodontitis is easily treatable, and the diseases associated with implants are very difficult to treat because the surfaces of the teeth can be cleaned, whereas the implant surface is difficult to treat or decontaminate.

Related articles
News Tue. 7 June 2022
Digital dentistry is not the future; it is the present

BASEL, Switzerland: It is clear from the growing number of clinicians already using digital technologies that offering simple, safe and more pleasant ...

STOCKHOLM, Sweden: Ten years ago, Sweden did away with the recommendation of administering antibiotics prophylactically for patients deemed at risk of ...

News Mon. 23 August 2021
Designing for the environment—sustainability in plastic products

There are many different aspects to consider in guiding the individual to suitable oral hygiene products: the patient’s oral status, abilities, ...

News Fri. 3 June 2022
The role of the orthodontist: Healthcare provider or salesperson?

The demand for gorgeous, perfect smiles has exploded in recent years. During the COVID-19 pandemic, the amount of time spent behind the screen, whether ...

OSLO, Norway: The widespread availability of vaccines in developed nations has significantly changed the risk of dentists contracting SARS-CoV-2 in a ...

News Thu. 13 May 2021
Interview: “The future is certainly looking bright”

This year, Planmeca is celebrating 50 years of contributions to modern dental practice. Many of our readers will know Heikki Kyöstilä, chairman and CEO ...

TRELLEBORG, Sweden: This is truly the golden age of endodontics. Advancements in technology, metallurgy and manufacturing techniques have enabled the ...

UPPLANDS VÄSBY, Sweden: Parkell, a recognised global leader in dental materials and equipment manufacturing for over 70 years, has announced the opening of...

COPENHAGEN, Denmark: The tenth edition of the triennial European Federation of Periodontology (EFP) congress, EuroPerio, has finally arrived. Until 18 ...